The
Science Earth
Home » Everyday » How Herpes Affects to your Brain?

How Herpes Affects to your Brain?

What is Herpes?
Oral herpes is an infection of the lips, mouth, or gums due to the herpes simplex virus. It causes small, painful blisters commonly called cold sores or fever blisters. Oral herpes is also called herpes labialis. 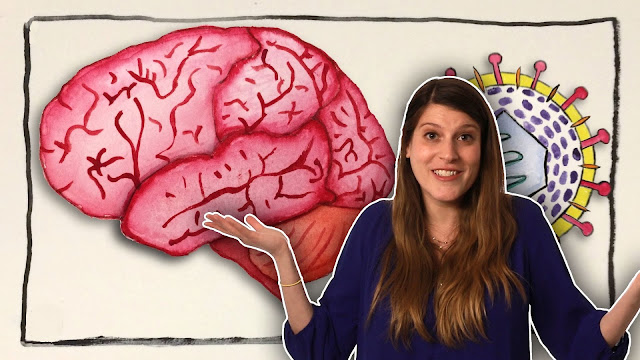 Oral herpes is a common infection of the mouth area. It is caused by the herpes simplex virus type 1 (HSV-1). Most people in the United States are infected with this virus by age 20.
After the first infection, the virus goes to sleep (becomes dormant) in the nerve tissues in the face. Sometimes, the virus later wakes up (reactivates), causing cold sores
Symptoms
Parents may spread the virus to their children during regular daily activities.
Some people get mouth ulcers when they first come into contact with HSV-1 virus. Others have no symptoms. Symptoms most often occur in kids between 1 and 5 years old.
Symptoms may be mild or severe. They most often appear within 1 to 3 weeks after you come into contact with the virus. They may last up to 3 weeks.
Warning symptoms include:
·         Itching of the lips or skin around the mouth
·         Burning near the lips or mouth area
·         Tingling near the lips or mouth area
How Herpes Affects to your Brain?
Herpes—it’s not something that many individuals readily admit to having, but if you’ve ever had chicken pox, glandular fever or even a cold sore, you’ve been an unlucky host of the herpes virus.
In this video from Gross Science, Anna Rothschild explains how herpes stays in the human body forever once contracted, lying dormant in neurons, and how the unwanted viral guest can, on very rare occasions, cause brain damage.
Be Sociable. Share This Article