The
Science Earth
Home » Health , Nature » Propolis as the OLDEST Cure: Here’s What It Can Treat and How to Use it!

Propolis as the OLDEST Cure: Here’s What It Can Treat and How to Use it!

Propolis isn’t called the “nature’s antibiotic” for nothing. It has very strong antibiotic and disinfectant properties, as well as analgesic and immunity-stimulating effects.It’s natural healing properties are mostly owed to the vitamins, mineral salts, micro-elements and ethereal oils it contains. However, out of all its healing properties, it’s the flavonoids which take the spotlight. 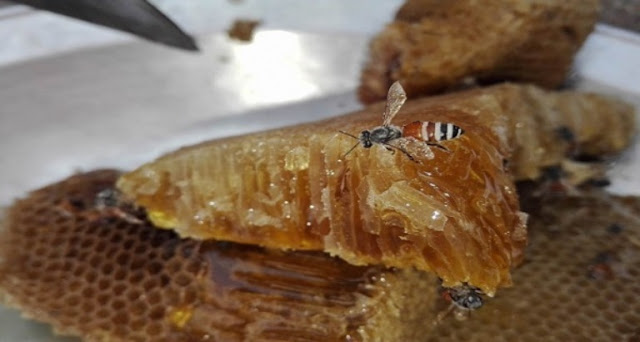 Due to its powerful properties, propolis has been used for ages for the treatment and prevention of many different diseases, including:
Stomach Problems
Propolis has a soothing effect on gastrointestinal problems. It not only stimulates digestion, but it also prevents infectious diseases. Its analgesic properties are best used in the cases of ulcers, gastritis and colitis.
Inflammations
Due to its potent analgesic and anti-inflammatory properties, propolis can speed up cell regenerations and decrease pains very effectively. It can also stimulate the operation of the body’s respiratory systems as well as relieve throat inflammations, toot aches, as well as gum inflammations. There are also many proofs that propolis can also prevent the appearance of caries, due to its anti-microbial properties.
Radiation and X-Ray Damage
Propolis is also known for its strong anti-radiation effect which makes it a great weapon against the exposure of radiation and X-ray, especially for people who are recovering from such problems. It can also be used as a preventive measure against the appearance of certain types of tumors (like breast cancer), while it’s soothing effect on skin burns and skin inflammations is already widely known.
Skin Diseases
Propolis has a proven effect on a series of skin diseases. It can help people who suffer from dermatitis, ulcers and eczemas, while it can also sooth the pains caused by minor and heavy skin damages and wounds. This is one reason why it’s commonly used to recover after being wounded. It can also treat staphylococcus infections and fungal infections (of the nails).
Weak Immunity
One of the most well-known uses of propolis is its use for boosting a weak immunity. Propolis has an immensely powerful antimicrobial and anti-viral effect. Thanks to its healing properties, it can stimulate the natural immunity and ensure the organism stays maximally protected through different seasons. It can also increase the hematophoesis and the creation of anti-bodies, while in the same time prevent the appearance of different types of bacteria and viruses.
How to Take Propolis?
Propolis drops, with a 10% propolis content, are usually taken in the following manner:
About 20 drops, in water, on a teaspoon of honey, or a sugar cube, should be taken 2-3 times a day. If you are using tinctures with a higher propolis concentration, the dose should be smaller. For example, a 30% solution should be taken for a maximum of 2 times a day, 8 drops each time.
In the case of mouth sprays, you need to spray the propolis directly on the affected area or wound. You can also make your own mouth wash out of propolis drops and use it to fight of infections. On the other hand, propolis nose sprays are used several times a day, according to your need. But unlike many other nose sprays, it doesn’t cause addiction after a long-term use.
For surface wounds, cuts, eczemas, and herpes, you should use a propolis gel and rub it on the affected area 2-3 times a day. While if you want to use propolis for dry skin, skin regeneration, and hemorrhoids, you should use a propolis-based creams. You can also use propolis-based “Vaginalettes” as a vaginal anti-septic or if you have increased vaginal
secretions.