The
Science Earth
Home » Health » YOUR BOTTLED WATER IS FILLED WITH FLUORIDE! LEARN WHAT BRANDS TO AVOID!

YOUR BOTTLED WATER IS FILLED WITH FLUORIDE! LEARN WHAT BRANDS TO AVOID!

You may have heard about some of the buzz surrounding fluoride. Its negative effects, according to research, appear to have become severe. The downsides of fluoride use have been brought to light and are now being discussed worldwide. Fluoride is found in many public water products, and may pose some serious health threats. If you’re a bottled water connoisseur, you’ll want to read on. 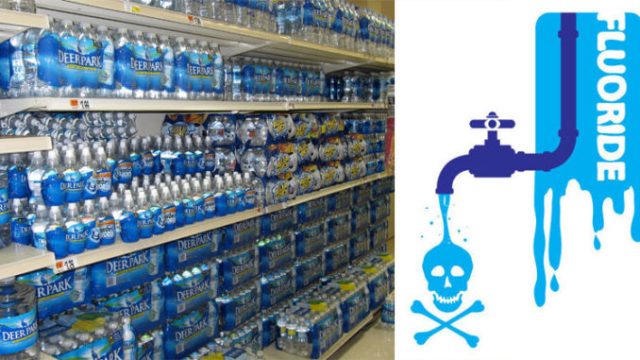 Experts have been arguing for years about whether or not fluoride in drinking water is toxic to humans. Recent studies have finally shown evidence that it is. Extremely high levels of fluoride have been shown to cause neurotoxicity in adults, resulting in negative impacts on memory and learning. Researchers from the Harvard School of Public Health and ChinaMedical University in Shenyang combined 27 studies, finding strong indications that fluoride also adversely affects cognitive development in children.A study published in the Journal of Epidemiological & Community Health found that those who consume fluoridated water are more likely to suffer from thyroid issues, which often result in depression and obesity.According to the study, “In many areas of the world, hypothyroidism is a major health concern and in addition to other factors — such as iodine deficiency—fluoride exposure should be considered as a contributing factor. The findings of the study raise particular concerns about the validity of community fluoridation as a safe public health measure.”In the United States, about 70% of public water supplies are fluoridated. Intake cannot be controlled, it’s available to everyone regardless of age or health, and it accumulates in the body. While fluoride is often associated with preventing tooth decay, research has found no significant relationship between tooth decay and fluoride intake among children. Many children are instead being overexposed to fluoride, leading to dental fluorosis, a discoloring of tooth enamelcaused by too much fluoride.The health risks of drinking fluoridated water are numerous. It can have negative impacts onoral health, interfere with brain functions, cause damage to the pineal gland, affect thyroid function, damage bone and decrease overall health. Knowing which bottled water brands to avoid is vital to keeping yourself and your family safe from the damaging affects of consuming too much fluoride.High-risk bottled water brands full of fluoride that you’ll want to avoid include:-Arrowhead-Belmont Springs-Crystal Rock-Crystal Springs-Deer Park-Diamond Springs-Ice Mountain-Mount Olympus-Ozarka-Poland Spring-Sierra Springs-ZephyrhillsSome fluoride-safe water bottle companies are listed below. Here’s a complete list.-Arbor Springs-Aquafina Water-Aqua Pure-Black Berry Farms-Blue Ice Natural Mineral Water-Cascade-Century Springs-Clear Mountain Spring Water-Crystal Spring Natural Spring Water-Dannon-Deja Blue-Eureka-Evian-Flowing Springs-Fresh Market-Glacier Bay-Hidden Valley Natural Mineral Water-Mountain Valley Spring Water-Oasis Pure Drinking Water-Polaris Water-Smart Water-Whole Foods 365Health affects of drinking bottled waterWhile knowing which bottled water brands to avoid is important, bottled water has its own impact on health and the environment. Around 67 million water bottles are throw away every single day, causing a staggering amount of waste. Drinking from plastic water bottles can also pose some serious health risks, including learning and behavioral problems, altered immune system function, early puberty in girls and fertility problems, decreased sperm count, prostate cancer, breast cancer, diabetes, and obesity. Thanks to BPA, an estrogen-mimicking chemical found in plastic, your health may be at risk if you’re drinking bottled water on a regular basis.