The
Science Earth
Home » News » Pigs are disposed off instead of eaten. Inadvisable to eat pork due to VIRUS

Pigs are disposed off instead of eaten. Inadvisable to eat pork due to VIRUS

Pigs were thrown to a pit because they were infected by a new virus. Do you believe this? 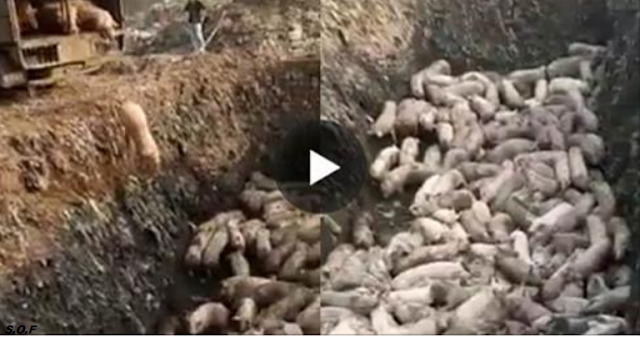 A video of pigs being thrown to a pit became viral days after it was posted.
It the video, pigs, perhaps dead, were seen at the bottom of the pit. More pigs from trucks were pulled by unidentified men only to be thrown at the rectangular excavation. The caption says warns not to eat pork because of a new virus circulating. The pigs were infected by the virus that is why they were disposed off.
The post was shared more than 130,000 times. Comments reached more than 4,000.
Despite the seemingly good intention of warning the public about the virus, the post raises many questions. What kind of virus is that? What are the signs and symptoms? Why only the pigs? What is the cause? Why not burn the pigs instead of throwing them to an open pit?

We don’t know the details of the virus or the real reasons behind the video. Nonetheless, we must be vigilant about the food that we eat and our health.
(Source)
SHARE SHARE SHARE