By now, it is fairly common knowledge that pesticide exposure is associated with a disturbing number of life-changing illnesses. Yet, for some reason, pesticides continue to be used on a widespread basis, with people around the world feeling the effects of these harmful toxins. The wide reach and influence of agricultural firms like Monsanto is responsible for many of the health problems faced by people around the world today.
The advocacy group, Beyond Pesticides, has created a Pesticide-Induced Disease (PID) database that provides vital information about the many dangers of these chemicals. The list is depressingly long, and its warnings are particularly important for children. Here is a look at nine of the diseases with the strongest links to pesticide exposure. 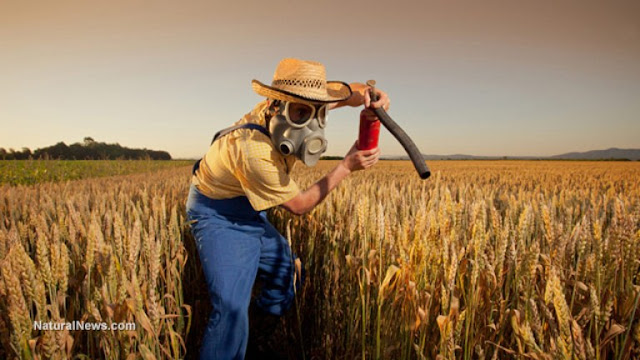 
This progressive brain-destroying disease reportedly affects up to 5.3 million Americans. The numbers have been rising recently in keeping with the rise in our nation’s pesticide use, and this appears to be more than a coincidence. Studies have found that people exposed to pesticides have not only a greater incidence of Alzheimer’s and dementia, but also increased dysfunction in psychomotor, behavioral and cognitive skills. The link is particularly strong when it comes to insecticides.
2. Cancer
Many cancers have been linked to pesticides, including brain, bone, liver, pancreas, bladder and prostate cancers, as well as leukemia. Cancers of the lymph system, such as Hodgkin’s and non-Hodgkin’s lymphoma, are particularly well-documented. These are the seventh most commonly diagnosed cancers in adults, and the third most common in children. In fact, children who live in agricultural areas have higher risks of several of these illnesses.
3. Birth defects
Birth defects in humans and animals alike have been noted with increasing frequency as pesticide use rises, particularly in agricultural areas. For example, gastroschisis, a birth defect in which a baby’s intestines and other organs develop outside the abdomen, occurs much more frequently in babies with mothers who live within 25 kilometers of sites where the pesticide atrazine was used. In fact, atrazine has been linked to nine different birth defects.
4. Endocrine disruption
In this condition, chemicals from pesticides as well as plastics, household cleaners and other chemicals make their way into the body and disrupt its hormonal balance, leading to disease, developmental problems and reproductive issues. The endocrine system, which includes the thyroid, and adrenal and pituitary glands, is vital for growth and development, and anything that disrupts it can have major repercussions on one’s overall health. Pesticides and other chemicals change the concentration of the body’s natural hormones and interfere with metabolism, hormonal synthesis, transport and excretion. Male hormones are particularly vulnerable, reports Scientific American.
5. Reproductive issues
Exposure to pesticides can affect the reproductive systems of men and women alike. In one study, men who had high levels of three different common pesticides in their urine were actually ten times more likely to have low sperm quality. Meanwhile, rats who experienced even very low exposure to pesticides developed reproductive problems. Several pesticides and fungicides are also known to impair the synthesis of testosterone.
6. Asthma and allergies
The rate of asthma has been climbing dramatically in keeping with the rise of pesticide use. It is estimated that around 16 million Americans suffer from asthma, which is not only chronic but can also be life-threatening. Pesticide use has also been linked to food allergies. An Agricultural Health Study of more than 25,000 farm women found a link between seven different insecticides and atopic asthma.
7. Diabetes
While an unhealthy lifestyle certainly plays a role in type 2 diabetes, the widespread exposure to pesticides containing organophosphate can induce obesity and spur diabetic reactions. In one of several studies into the connection, a North Carolina State University study found elevated levels of diabetes among women who were exposed to five different classes of pesticides.
8. Parkinson’s Disease
This common neurodegenerative disease affects more than a million Americans, whose brain nerve cells become so damaged that they are unable to control the movement of their muscles. Pesticide exposure has been identified as a leading cause of this, with one study finding that the frequent use of household pesticides boosted a person’s odds of Parkinson’s by 47 percent. Even more alarmingly, those who frequently used organophosphate pesticides had a 71 percent higher likelihood of developing the neurodegenerative disease.
9. Developmental and learning disorders
Because organs continue to develop throughout childhood, children are particularly vulnerable to the effects of pesticides, and one place this can be quite evident is in the brain. Even low levels of pesticide exposure have been found to affect intelligence and behavior. Children who live in areas subjected to aerial spraying of pesticides for mosquitoes are 25 percent more likely to experience developmental disorders and autism.
The problems caused by pesticides are so bad that the French town of Saint-Jean has banned their use within 160 feet (50 meters) of homes. The town’s deputy mayor, who also happens to be a doctor, summed it up: “Research shows that people living near areas where pesticides are used are more affected by some diseases: endocrinal hormone disruption, diabetes and obesity, hormone-dependent cancers, cancer of the blood, male and female fertility problems and birth defects.”
If only every town – especially those with or close to farming communities – could get on board and protect the health of its citizens in such a strong and fearless way.