One of the most common cancers affecting women of all ages, especially those younger than 50, cervical cancer claims more than 4,000 lives annually in the US only. Once the leading cause of death among women, cervical cancer incidence and death rate have decreased significantly due to the increased use of the Pap test. This pain-free screening procedure is highly efficient because it can detect changes in the cervix even before cancer develops. Plus, it can detect cervical cancer early − in its most curable stage. 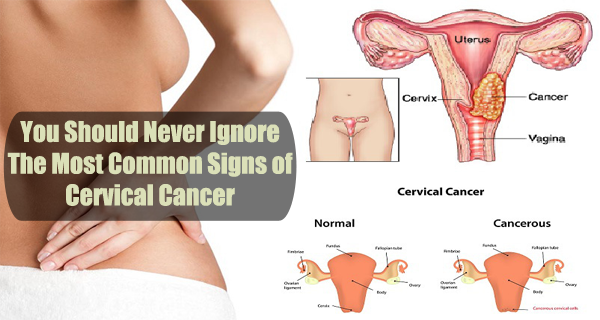 The importance of regular Pap smears is crucial due to the fact that this type of cancer, just like any other cancer, rarely shows signs in its early stages. Symptoms typically only become apparent when the cancer cells spread to other tissues and organs.

When symptoms do appear, they normally include the following:

Generally, any vaginal bleeding excluding your monthly period is a warning sign that asks for immediate medical attention. This includes bleeding after:

This is another signs of cervical cancer that could point to cervical dysplasia or cervical cancer development. The vaginal discharge can contain some blood and may occur between your periods or after menopause. Plus, it can be:

Any pain or bleeding after intercourse is a serious indicator that something is going on in your uterus that requires pelvic examination.

Although these three signs can indicate an early stage of cervical cancer, more serious symptoms appear in the later or advanced stages. Most common symptoms of advanced cervical cancer include:

These symptoms and signs of cervical cancer can also be triggered by other conditions that exclude cervical cancer, such as a severe vaginal infection. Should any of these symptoms appear, seek medical attention immediately, as whatever the cause, when detected early, there are higher chances of effective treatment.