The
Science Earth
Home » Health » Truths And Misconceptions About Beer

Truths And Misconceptions About Beer

For all registered and unregistered alcoholics, sympathizers or sporadic beer lovers.
Egyptian legend says that the inventor of beer was Osiris, the god of fertility, soil and vegetation, and in ancient times beer was not considered just a drink, it was the drug and food. This ancient beverage has “survived” until today and got enormous popularity but some of the dilemmas are associated to bear that we tried to clarify. 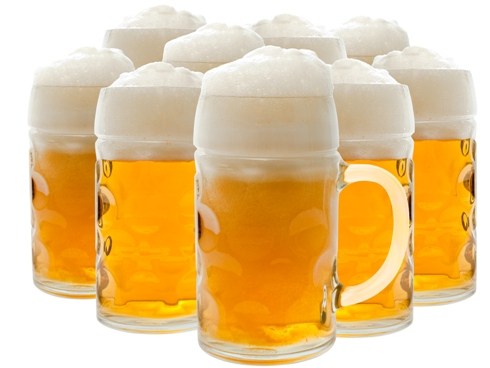 How much beer is beneficial to health, and how much harmful?
Numerous scientific studies have identified hundreds of biologically active compounds present in beer, which have a beneficial impact on human health. It is particularly for phytochemical xanthohumol, which is a bitter substance in beer, and has anticancer activity.
However, nowadays we have to be aware of the dangers of exaggeration in alcohol. Excessive alcohol consumption has a negative impact on health and the environment, so must be very cautious when advise about the beneficial effect of alcoholic drinks on health. The key word in all knowledge about the positive impact of alcoholic beverages on health is “moderate”.
Drink moderately, so drink within the limits that determine health, the society in which we live and obligations to family and friends; For most men this means 1-3 drinks daily. Women are more sensitive to alcohol, and is recommended smaller amount of drinks than men; 1-2 drinks daily.
The amount of alcohol in the “glass” of beer can vary considerably, depending on the size of the glasses and the alcoholic strength. A norm for one drink is usually a glass volume of 0.25-0.3 dl.
It should be remembered that the recommendations of the benefits of moderate alcohol consumption relates only to healthy adults and that there are certain situations in which moderate alcohol consumption can be considered abuse. The situations in which moderate alcohol consumption is not recommended as pregnancy, consuming pre drive and use machines or simultaneous consumption of alcohol and some drugs.
Does beer cause weight gain?


Beer has a similar energy value as milk and there are no “hidden” relationships that would influence the weight gain, especially the occurrence of the so-called beer belly. Exaggeration entering any food or drink will result in the accumulation of body fat. The reason for the possible tendency of gain kilograms of beer drinkers may lie in the fact that they exaggerate drinking, because it is a “liquid food”. Furthermore, it is scientifically proven that eating habits of beer drinkers are less in line with nutritional recommendations, but examples of people who often drink wine.
Is beer really nutritious?     More than 90% of beer is water, so the beer can be considered a contribution to daily fluid intake. The products are made from selected ingredients – malt, grain, hops, yeast and water. These are all natural ingredients that contribute to a healthy and balanced diet. Although moderate consumption of beer can provide many essential vitamins and minerals should not be forgotten that beer must always be consumed in moderate part of a balanced diet.
Beer contains no fat, has a low percentage of protein and carbohydrates are mostly from barley. Beer drinkers often justify their love of beer, pointing out that in this way bring important B group vitamins. Indeed, the yeast that is responsible for fermentation products, vitamins B group which remain in the beer. However, the attempt to supply vitamins B group by the beer will not be so successful, since the exaggeration caused by vitamin deficiency, due to the alcohol content, which is a known “thief” of vitamins, especially vitamin B1.
Beer contains many trace elements and minerals. Their amount depends on the origin of the raw materials, preparation method, and the manufacturing process. The presence of minerals such as iron, chromium, copper, silicon and potassium can certainly be considered a favorable attribute. It is particularly favorable ratio of sodium and potassium, where the potassium is in advantage, which is a prerequisite for proper fluid balance in the body and prevents high blood pressure.
A wide range of biologically active components derived from plants are found in beer. Specifically, it is about photochemical, especially polyphones, which are considered responsible for the beneficial properties of red wine, but there are also found in beer. Polyphones protect the cardiovascular system and have antioxidant activity
Cold beer as summer refreshment, yes or no?
Many people reach for a cold beer as refreshment during the hot summer days. However, consumption of alcohol is not recommended during the unbearable heat, because alcohol dehydrates the body further. Again, the key is moderation. However it is the best for the summer evenings of relaxation!
(source)
SHARE SHARE SHARE