Gaining less weight is as easy as eating more. Sound strange? It’s not; but it is all about eating smart. In this case, eating smart is eating flavonoid-rich fruits and vegetables like apples, pears, and berries, according toresearch published in the British Medical Journal. 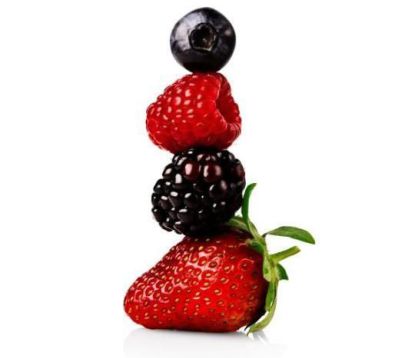 In the study, researchers observed how the consumption of seven different flavonoid subclasses affected the weight of 124,086 men and women over the span of 24 years. All of the participants were either part of the Health Professionals Follow Up Study, Nurses’ Health Study, or Nurses’ Health Study II.

The main source of anthocyanins came from blueberries and strawberries; flavanols and their polymers were chiefly derived from tea and apples; flavanone and flavones primarily came from orange juice and oranges; and flavanols were mostly gained through the consumption of tea and onions.

Losing just small increments of weight can reduce your risk of diabetes, cancer, and cardiovascular disease, so load up on the good stuff. The authors suggest bulking your fruit and vegetable intake (especially since most of us get less than one cup of fruit and less than two cups of vegetables each day).

And, naturally, choose the fruits and vegetables richest in flavonoids. There’s a multitude of health benefits packed in these plant compounds. Other than helping you stay lean, here are four more reasons to eat ‘em.

1) Fight Erectile Dysfunction
In a study of more than 50,000 men—published in The American Journal of Clinical Nutrition—researchers discovered men who regularly consumed flavanoid-rich foods, especially those with anthocyanins, flavones, and flavanones, experienced a 10 percent reduced risk of erectile dysfunction than men who didn’t. And overall, men with a higher total intake of fruit saw a 14 percent reduced risk of ED. What’s more, consumping several servings of these foods each week is as beneficial for your manhood as briskly walking for five hours each week. But, if you really want to reap the benefits, men who exercised and consumed flavanoid-rich foods experienced a whopping 21 percent reduced risk of erectile dysfunction. The top sources of anthocyanins, flavones and flavanones are strawberries, blueberries, red wine, apples, pears and citrus products—so eat up.

Diets rich in flavonoids may protect men (but not women) against Parkinson’s, according to a study from the Harvard School of Public Health and Norwich Medical School of 130,000 men and women over the course of 20-22 years. Men who ate the most flavonoids had a 40 percent lower risk of developing Parkinson’s than those who ate the least. The top sources of flavonoids are naturally occurring compounds found in berries, tea, dark chocolate, and red wine.

Phenols—compounds with antioxidant or anti-inflammatory properties—found in pears can combat type-2 diabetes by preventing the starch from high-carb foods from quickly turning into glucose. The pulp from Bartlett pears can lower blood pressure and fermented pear juice can inhibit H. pylori, an ulcer-causing stomach bacteria.

4) Lower Your Risk of Stroke

A systematic review of studies from PubMed revealed pears can protect and lower your risk of stroke in addition to the health benefits we previously mentioned. Other flavonoid-rich foods—were also associated with a reduced risk of death from coronary heart disease and cardiovascular disease.