Many cruciferous vegetables like broccoli and cabbage are able to prevent obesity, to protect against heart disease, and even to avert cancer. Researchers with Baylor College of Medicine have found that the compound sulforaphane in these valuable veggies can actually kill cancer cells. 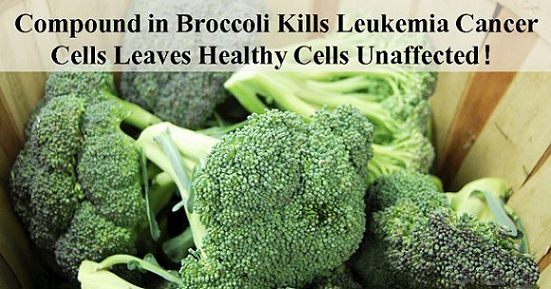 Researchers used a concentrated form of this compound on human-derived leukemic cancer cells. Since acute lymphoblastic leukemia is a type of cancer of the white blood cells most common in children, for their study the researchers used leukemic cancer cells from pediatric patients.
“Sulforaphane is a natural product. However, what we used in this study is a concentrated purified form. So while eating cruciferous vegetables is good for you, it will not have the same effect as what we saw in the lab,” said Dr. Daniel Lacorazza, appointed Assistant Professor of Pathology and Immunology at the College. He also said that the cure rate is about 80%, but some children don’t respond to the treatment. For those difficult cases, he called for alternative treatments.
“It appears that DNA methylation and HDAC inhibition, both of which can be influenced by sulforaphane, work in concert with each other to maintain proper cell function,” said another researcher Ho. “They sort of work as partners and talk to each other.”
The study published in the journal PLoS ONE was finished with this statement:
“Finally, the administration of sulforaphane to the ALL (short for acute lymphoblastic leukemia) xenograft models resulted in a reduction of tumor burden, particularly following oral administration, suggesting a potential role as an adjunctive agent to improve the therapeutic response in high-risk ALL patients with activated AKT signaling.”
When treated with the concentrated formula of sulforaphane, the cancer cells perished while healthy cells stayed completely unaffected! It’s worth mentioning that other natural foods like turkey tail, turmeric, mushroom, ginger and grape seed extract have also been found to eliminate cancer cells while leaving healthy cells evidently unaltered!

How does sulforaphane work?
Sulforaphane is known as an HDAC inhibitor, meaning it works to restore balance in the enzymes known as histone deacetylases (HDACs). HDAC imbalance is known to interfere with the normal function of tumor suppressing genes. Hence, sulforaphane helps prevent cancer development by inhibiting HDACs.
In addition, it works to influence DNA methylation, which is the normal process of turning off or deactivating genes that could lead to abnormal cell growth. As with HDAC, sulforaphane is able to restore the balance and correct the DNA methylation processes.
Past research on sulforaphane
It is true that eating broccoli may not kill cancer if you have already been diagnosed with this disease. The above mentioned study isn’t the first one, and probably will not be the last one, to suggest that sulforaphane may be crucial for treatment and prevention of other types of cancers as well.
One previous research came up with similar results, finding that the compound sulforaphane could actually help reduce prostate proliferation by dampening the effects of cells missing an important gene, called PTEN. When this is achieved, normally, prostate cancer will be stopped from developing.
There is another study that pointed out the compound’s value in protecting against breast cancer. So, when new research, like the one done at Baylor College of Medicine, shows how diseases like cancer can be treated and prevented with simple foods like broccoli, we have to spread the word!
We should not just wait to get sulforaphane in a supplement or drug form, but rather, we should continue (or start!) eating cruciferous vegetables on a more regular basis. There are already too many followers of the Standard American Diet (abbreviated SAD) who believe that diet only affects weight, diabetes or heart disease. Luckily, the connection between diet and cancer has not been broken yet.
Organically grown cruciferous vegetables such as cauliflower, cabbage, garden cress, bok choy (Chinese cabbage), broccoli, Brussels sprouts and similar green leafy vegetables are priceless. Their health benefits, when it comes to treating or preventing lethal diseases, are near countless. Do something for your health now: The more you increase your consumption of these nutritious ‘little bushes’ the smaller number of visits to your doctor you pay!
Source: healthyfoodstyle
SHARE SHARE SHARE